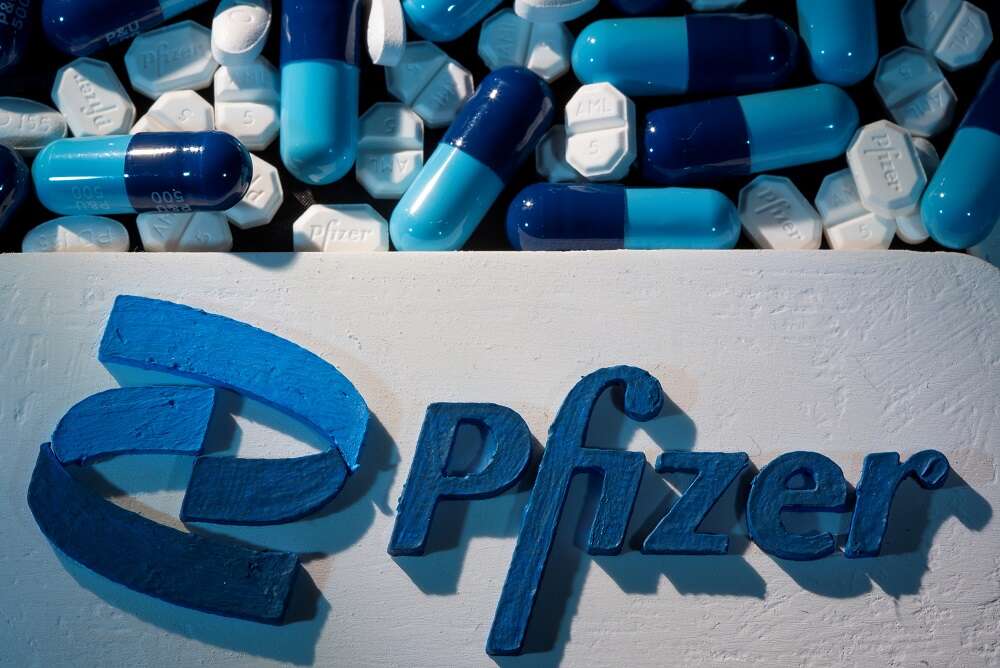 (Reuters) -A trial of Pfizer Inc’s experimental antiviral pill for COVID-19 was stopped early after the drug was shown to cut by 89% the chances of hospitalization or death for adults at risk of developing severe disease, the company said on Friday.

The results appear to surpass those seen with Merck & Co Inc’s pill, molnupiravir, which was shown last month to halve the likelihood of dying or being hospitalized for COVID-19 patients also at high risk of serious illness.

Full trial data is not yet available from either company.

Shares in Pfizer, which also makes one of the mostly widely used COVID-19 vaccines, surged 11% to $48.55, while those of Merck fell 8.5% to $82.80. Shares of other vaccine makers also took a hit, with Moderna Inc, Pfizer’s German partner BioNTech SE and Novavax all down 10-15%.

Pfizer said it planned to submit interim trial results for its pill, which is given in combination with an older antiviral called ritonavir, to the U.S. Food and Drug Administration (FDA) as part of the emergency use application it opened in October.

That filing is expected to be submitted before the U.S. Thanksgiving holiday on Nov. 25, Pfizer Chief Executive Albert Bourla said in an interview with CNBC.

The combination treatment, which will have the brand name Paxlovid, consists of three pills given twice daily.

The planned analysis of 1,219 patients in Pfizer’s study looked at hospitalizations or deaths among people diagnosed with mild to moderate COVID-19 with at least one risk factor for developing severe disease, such as obesity or older age.

It found that 0.8% of those given Pfizer’s drug within three days of symptom onset were hospitalized and none had died by 28 days after treatment. That compared with a hospitalization rate of 7% for placebo patients. There were also seven deaths in the placebo group.

Rates were similar for patients treated within five days of symptoms – 1% of the treatment group was hospitalized, compared with 6.7% for the placebo group, which included 10 deaths. Bourla said that works out to being 85% effective.

The data compared favorably to Merck’s oral antiviral in a similar patient population, Cantor Fitzgerald analyst Louise Chen said in a note, but added that Merck was in the lead with the launch of its pill and expects an FDA decision before the end of the year.

A panel of outside experts to the FDA is scheduled to meet Nov. 30 to discuss Merck’s pill, which was approved by British regulators in a world first on Thursday.

With COVID-19 still circulating widely and current therapeutic options requiring access to a healthcare facility, antiviral treatments that can be taken at home to keep people out of the hospital are critically needed, Chen said.

Antivirals need to be given as early as possible, before an infection takes hold in order to be most effective. Merck tested its drug within five days of symptom onset.

“This means that we have time to treat people and really provide a benefit from a public health perspective,” Annaliesa Anderson, head of the Pfizer program, told Reuters.

The company did not detail side effects of the treatment, but said adverse events happened in about 20% of both treatment and placebo patients. Ritonavir’s possible side effects include nausea and diarrhea.

White House Chief of Staff Ronald Klain said the https://twitter.com/WHCOS prospect of an antiviral this effective along with rollout of vaccines for children between the age of 5 and 11 underway could be a turning point week in fight against COVID-19. Klain cautioned that the pill still needed to be reviewed by the FDA.

“These data suggest that our oral antiviral candidate, if approved by regulatory authorities, has the potential to save patients’ lives, reduce the severity of COVID-19 infections, and eliminate up to nine out of ten hospitalizations,” Bourla said in a statement.

Infectious disease experts stress that preventing COVID-19 through wide use of vaccines remains the best way to control the pandemic, but only 58% of Americans are fully vaccinated and access in many parts of the world is limited.

Pfizer’s drug, part of a class known as protease inhibitors, is designed to block an enzyme the coronavirus needs to multiply.

Merck’s molnupiravir has a different mechanism of action designed to introduce errors into the genetic code of the virus. Merck has already sold millions of courses of the treatment to the United States, Britain and others.

Pfizer is also studying whether its pill could be used by people without risk factors for serious COVID-19 as well as to prevent coronavirus infection in people exposed to the virus.