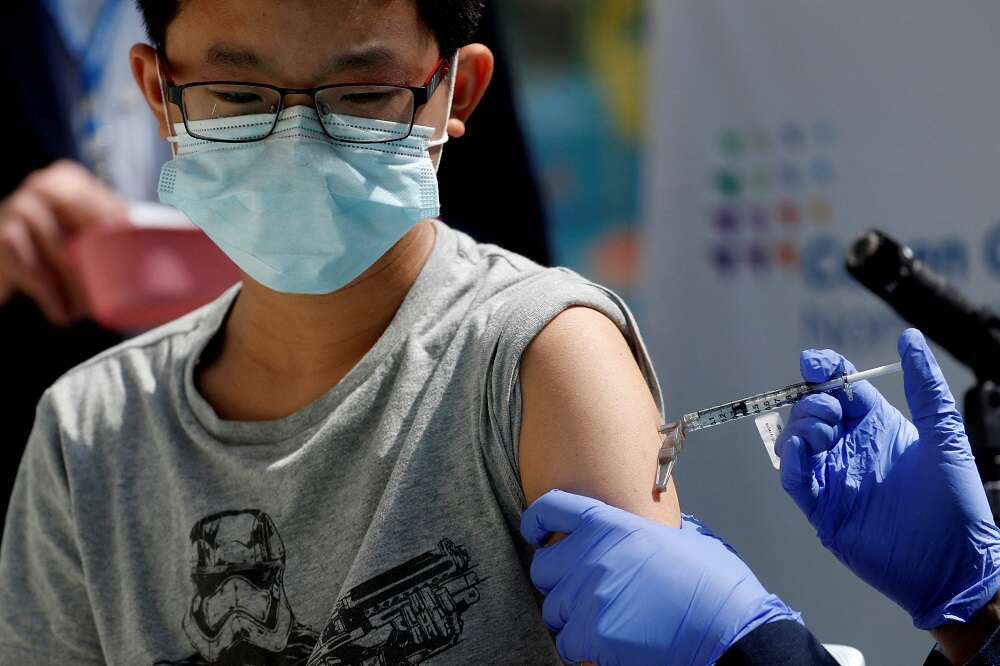 By Ahmed Aboulenein and Ankur Banerjee

WASHINGTON (Reuters) -The U.S. Food and Drug Administration on Monday authorized the https://www.fda.gov/media/150386/download use of a third dose of the Pfizer and BioNTech COVID-19 vaccine for children ages 12 to 15, and narrowed the time for all booster shots by a month to five months after the primary doses.

The agency also authorized a third shot for children aged 5 through 11 years who are immunocompromised.

The regulatory decisions come as schools reopen in much of the country, and as COVID-19 cases surge due to the Omicron variant of the virus, with health authorities warning that its high transmissibility could overwhelm many health systems.

The U.S. Centers for Disease Control and Prevention is expected to weigh in on the changes this week, according to the New York Times. The CDC was not immediately available for comment.

“Based on the FDA’s assessment of currently available data, a booster dose of the currently authorized vaccines may help provide better protection against both the Delta and Omicron variants,” said Peter Marks, director of the FDA’s Center for Biologics Evaluation and Research.

The U.S. government has been urging vaccinated Americans to get boosters and for the unvaccinated, who are at much higher risk of severe COVID-19 and death, to be inoculated.

So far, 62% of the eligible U.S. population is considered fully vaccinated with a third of them also having received a booster dose.

In making its decision, the FDA said it reviewed real-world data from Israel, including safety data from more than 6,300 individuals aged 12 through 15 years who received a booster dose of the Pfizer-BioNTech vaccine at least 5 months following completion of the primary two-dose vaccination series.

There were no new cases of a rare type of heart inflammation reported to-date in these individuals, the FDA said.

Laboratory tests have shown that two doses of the Pfizer-BioNTech and Moderna vaccines generate low immune responses against Omicron, while the addition of a booster appears to restore protection against the highly-mutated variant.

Two shots of the mRNA vaccine are about 35% effective against infection from the Omicron variant, but a booster dose restores effectiveness to 75%, according to the CDC, based on data from South Africa and the United Kingdom.

The FDA said authorizing the shot at 5 months instead of 6 may provide better protection sooner against Omicron.

“A good thing here is also the change on the timing of the booster to five months instead of six. That’s a big step for this country, which has been resistant to the data,” he added.

Countries including the United Kingdom and Israel have narrowed their window for boosters from six months to three or four following the second shot to try to fight the spread of the easily transmitted Omicron variant.

Amesh Adalja, a senior scholar at the Johns Hopkins Institute for Health Security, said he does not believe a boosters is necessary for most people since two doses of the vaccine have been effective at preventing hospitalizations and severe disease in all but older people.

(Reporting by Ankur Banerjee and Manas Mishra in Bengaluru and Ahmed Aboulenein in Washington DC; Editing by Sriraj Kalluvila and Bill Berkrot)