No poop for you: Manure supplies run short as fertilizer prices soar 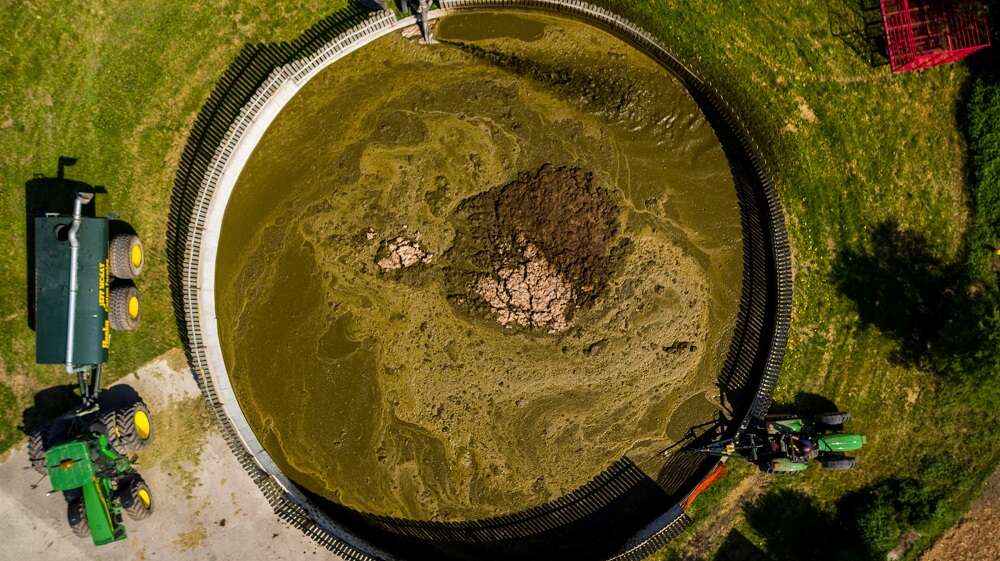 CHICAGO (Reuters) – For nearly two decades, Abe Sandquist has used every marketing tool he can think of to sell the back end of a cow. Poop, after all, needs to go somewhere. The Midwestern entrepreneur has worked hard to woo farmers on its benefits for their crops.

Now, facing a global shortage of commercial fertilizers made worse by Russia’s invasion of Ukraine, more U.S. growers are knocking on his door. Sandquist says they’re clamoring to get their hands on something Old MacDonald would swear by: old-fashioned animal manure.

“I wish we had more to sell,” said Sandquist, founder of Natural Fertilizer Services Inc, a nutrient management firm based in the U.S. state of Iowa. “But there’s not enough to meet the demand.”

Some livestock and dairy farmers, including those who previously paid to have their animals’ waste removed, have found a fertile side business selling it to grain growers. Equipment firms that make manure spreading equipment known as “honeywagons” are also benefiting.

Not only are more U.S. farmers hunting manure supplies for this spring planting season, some cattle feeders that sell waste are sold out through the end of the year, according to industry consultant Allen Kampschnieder.

Sky-high prices for industrial fertilizer are projected to reduce American farmers’ corn and wheat plantings this spring, according to U.S. government data. That further threatens global food supplies as domestic wheat inventories are the lowest in 14 years, and the Russia-Ukraine war is disrupting grain shipments from those key suppliers.

While manure can replace some of the nutrient shortfall, it’s no panacea, agriculture specialists say. There’s not enough supply to swap out all the commercial fertilizer used in the United States. Transporting it is expensive. And prices for animal waste, too, are rising on strong demand.

It’s also highly regulated by state and federal authorities, in part due to concerns about impacts on water systems.

Manure can cause serious problems if it contaminates nearby streams, lakes and groundwater, said Chris Jones, a research engineer and water quality expert at the University of Iowa.

Livestock farmers say it’s a heavy lift to meet all the government rules and track how manure is applied.

Regardless of the drawbacks, demand is booming.

In Wisconsin, three dairy farmers told Reuters they turned down requests to buy their manure sent via text and Twitter messages.

Smithfield Foods, the world’s largest pork producer, has noticed the shift at the U.S. hog farms that supply its slaughterhouses.

“We’re definitely seeing farmers move toward manure with the increase in fertilizer prices,” said Jim Monroe, a spokesperson for the company, which is owned by Hong Kong-listed WH Group Ltd.

War in Ukraine has made the situation worse by reducing fertilizer exports from Russia and its ally Belarus due to Western sanctions and shipping snags. That threatens to shrink harvests around the world at a time of record food inflation. Combined, Russia and Belarus accounted for more than 40% of global exports of potash last year, one of three critical nutrients used to boost crop yields, according to Dutch lender Rabobank.

One person left bereft is Dale Cramer, who grows corn, soybeans and wheat on about 6,000 acres in Cambridge, Nebraska. Searching for alternatives, he has sniffed around feedlots for manure since last August with no luck.

“A lot of people have put their names in for the same thing,” Cramer said.

With demand for manure surging, prices have followed, delivering an unexpected windfall to livestock producers and cattle feedlots.

Prices for good-quality solid manure in Nebraska alone have reached $11 to $14 per ton, up from a typical price of $5 to $8 per ton, consultant Kampschnieder said. A dry winter helped drive up prices by leaving manure with less water in it, making it more concentrated, and thus more valuable, he said.

Iowa farmer Pat Reisinger is relieved he has dung from the pigs and dairy cows he raises to fertilize the corn, soybeans and hay he grows to feed those animals. He sold a little manure to one neighbor and is getting phone calls from others in need.

“If I sold any more, I’d have to turn around and buy commercial fertilizer, which makes no sense,” Reisinger said.

The boom has also has lifted machinery companies that make spreading equipment for solid manure as well as so-called honeywagons: wheeled tanks hitched to trucks and tractors for transporting and applying liquefied waste.

In Canada, Husky Farm Equipment Ltd is sold out of honeywagons. The company built its first contraption back in 1960 as a way to make collecting and spreading manure more efficient, according to President Walter Grose. Today Grose sells directly to farmers and machinery dealerships, and he can’t keep up.

“We have people looking for equipment right away and we’re sold out for six months,” said Grose who sells honeywagons in several sizes. Bigger tanks come with a $70,000 average price tag.

CNH Industrial, the American-Italian farm and construction equipment giant, said it has seen strong demand for its New Holland brand box spreaders – essentially, a steel box that attaches to a tractor to haul and spread solid manure.

Kansas equipment dealership KanEquip Inc is sold out of New Holland spreaders, even though prices have jumped 10% from the normal list price of $30,000, said regional manager Bryndon Meinhardt. He said the dealership has ordered 10 more to meet demand.

NO POOP FOR YOU

Even in states where large livestock herds generate massive quantities of manure, there’s not enough to replace commercial fertilizer completely. Iowa, the top U.S. producer of pork and corn, already applies all of its manure on land covering about 25% of its corn acres each year, said Dan Andersen, an associate professor at Iowa State University who specializes in manure management.

On average, Iowa uses about 14 billion gallons of manure annually, said Andersen, known as @DrManure on Twitter. He expects Iowa growers may suck out an extra billion gallons this year from storage in tanks on farms to substitute pricey commercial fertilizer.

Part of the current supply problem is rooted in the evolution of the U.S. farm economy. As America’s livestock sector has consolidated, there are geographical hubs where animals are raised for eggs, milk or meat, and where the most manure is produced. As a result, some places have too little, while others have too much and have wrestled with ways to dispose of it.

Last October, Pennsylvania dairyman Brett Reinford thought he might be tight on manure storage space over the winter. So he made an offer to local farmers: You come and haul it away, you can have it for free. He got no takers.

Fast forward six months and Reinford is now sitting on liquid gold. “We’re keeping it all and I wish we had more,” he said.

The number of hogs in the United States has dropped to its lowest level in about five years, as producers grapple with swine diseases and rising costs for feed and other inputs. Bird flu, meanwhile, has wiped out more than 22 million chickens and turkeys on commercial U.S. farms since February.

But even hard-hit poultry farmers could have something to use: Their dead birds can be composted and applied as fertilizer, according to the Iowa Department of Agriculture and Land Stewardship.

(Reporting By P.J. Huffstutter and Tom Polansek in Chicago, and Bianca Flowers in Chicago and New York. Additional reporting by Leah Douglas in Washington, D.C.; Editing by Caroline Stauffer and Marla Dickerson)