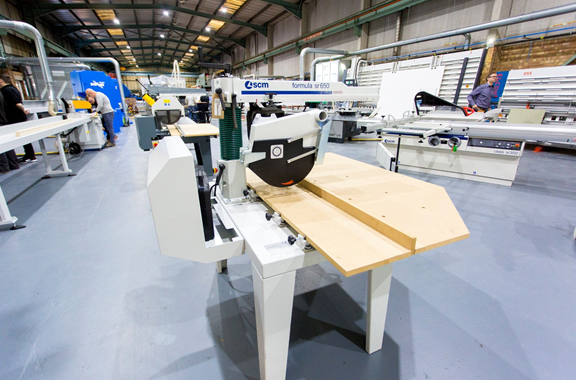 During that time, the Nottingham-based fourth-generation family-run business has survived a world war, crippling recessions, changes in direction, and most recently a pandemic.

It’s a humbling story and, perhaps, there isn’t anyone that has seen as much as Steve Balchin, the company’s Technical Director. 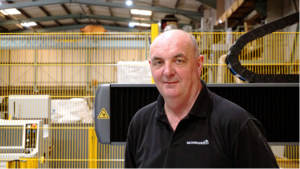 Steve joined Daltons Wadkin in 1984 as an engineer and is currently the company’s longest-serving employee.

Over that time, Steve has had quite a career working on some exciting contracts from some of the world’s biggest car manufacturers and even the James Bond and Harry Potter franchises.

He said: “I’m quite lucky for some of the opportunities that I’ve had and I’m very proud.”

“Daltons Wadkin supplied the kit for the Harry Potter and James Bond films and I went and installed all the workshop equipment for the scenery sets.

“The first James Bond film we worked on was Moonraker and with the Harry Potter films we did all the work for them at Leavesden Studios.”

Steve added: “It’s quite surreal to think when you watch the films that all the machinery that’s used to make the sets, was set up and installed by us. It’s quite fascinating.”

One of Steve’s proudest moments working for the firm, however, was being asked to contribute to a charity documentary film in Sierra Leone for Channel 4.

“I was out there with Nick Hewer, who is the ambassador of Street Child, a charity to help kids who have lost their parents to things like aids and helping people set up little industrial businesses.”

“I went out there with Nick and the film crew and we set up a workshop there and this documentary was filmed and shown on Channel 4.”

Steve’s role with Daltons Wadkin has taken him all over the world, and he admits that since starting in 1984, no two days have been the same.

“I’ve been to some of the most inhospitable places in the world to work. I’ve been to India, Africa, Sierra Leone, and the Falkland Islands.

“20 or 30 years ago I don’t think the Daltons brothers ever would have dreamed they would be sending engineers all around the world to work on contracts. One minute you’re in a prison and the next you could be standing in one of the world’s oldest distilleries.”

Steve added: “To be honest, no day with Daltons Wadkin is ever the same.”

Having had a great relationship with previous owners Nigel and Francis Dalton, Steve was very keen to strike a similar one with son of Nigel, Alex who now leads the business.

“I used to work quite closely with Nigel. You really could have a lot of banter with him, he enjoyed it whereas Francis was a lot more serious. He’d be giving me a lecture on not even attempting to wind him up or what have you.

“Since Alex has taken over, he has the same approach to life as his dad did and you can have a lot of banter and a lot of fun with Alex.”

With Daltons Wadkin celebrating 120 years in business, Steve believes the secret to success for the family-run business lies with their passion for always wanting to improve and keeping the customer in mind.

“I would say, they’re always prepared to try new avenues to boost the business”, he added.

“For example, originally, they used to do generator sets and, just after the war, diversified into woodworking machinery.”

“They’ve also expanded the portfolio of machines that we sell greatly so they’re not in a little bubble where they only sell two or three types.

“We now have one of the largest service departments of any distributor, a dedicated operator training department along with spare parts and tooling”

The landscape of the woodworking industry has changed dramatically over the years with machines becoming more technologically advanced. Steve made it clear that in order to stay relevant in the industry it was important for Daltons Wadkin to be open to new ideas and have an ability to adapt.

“The CNC side of machinery is always developing, along with new and safer systems.”

“The HSE (Health and Safety Executive) introduced a new set of regulations in 1998 that meant all the manufacturers of the machines had to develop the machines and to progress them forward to keep up with the current regulations.”

“That’s how it’s developed, it’s far more technically advanced than it ever was.”

In addition to the advancement of the technology of the machines, Steve argued the change in design and appearance of the new machines has been just as dramatic.

“The paintwork on all machines are done up to a high standard and you know the new machines look as good as a new Jaguar car with the finish on them.”

“There’s massive advances in the quality, overall appearance and efficiency of the machines now.”

So many businesses are facing a tough end to 2021 due to the COVID-19 pandemic but Steve insists the future of Daltons Wadkin is very bright and business is as good as ever.

“Alex has definitely got the passion for continuing the Daltons Wadkin name”, he said.

“It has been going for over 120 years  – there are not too many family businesses who can say that. I have no doubt the future for Daltons Wadkin is in safe hands.

“Alex has the same mindset to progress the business as his dad and uncle had so I would say the future is looking pretty good.”